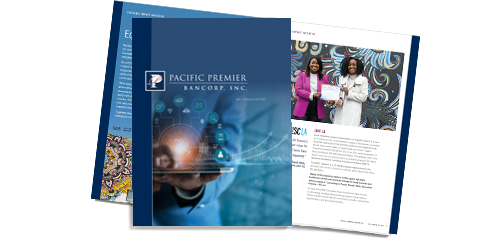 At Pacific Premier, it’s not business as usual. We work hard every day to set ourselves apart, and our dedication to our clients is standard operating procedure. We also take pride in the communities where we work, do business, and live including Los Angeles, Orange, Riverside, San Bernardino, San Diego, Santa Barbara, San Luis Obispo, Arizona, Nevada, Oregon, and Washington. We partner with community based organizations and other stakeholders to strengthen our communities and foster growth.

Founded in 1983, Pacific Premier Bank® is headquartered in Irvine, California, serving businesses and individuals throughout the United States. With over $21 billion in total assets1, we’re one of the strongest-performing, and fastest-growing banks in the nation. Our commitment to providing unparalleled client service, supporting the businesses and individuals in the communities we serve, and enhancing shareholder value drives everything we do.

We offer a full array of deposit and loan products and services for commercial businesses, nonprofit organizations, and consumers. We specialize in servicing small and middle-market businesses and professionals who need a broad range of loan, deposit, and treasury management products. In addition, we have specific market sector expertise in:

We know that when our clients do well, we do well. It’s our focus every day to find new opportunities for our clients to grow and succeed. Give us a call at 888.388.5433 and Let's Talk®.

The success of the Bank's turnaround plan was noticed by investors who drove up Pacific Premier PPBI stock by 546% in a 3-year period from 2002 to 2004.

We did not utilize or need government assistance in the form of TARP funds.

Named a member of the Sandler O'Neill + Partners Sm-All Stars Class of 2011, based upon exceptional performance metrics in growth, profitability, credit quality, and capital strength.

Raised $37 million of equity to support organic growth and acquisitions.

Named a member of the Sandler O'Neill + Partners Sm-All Stars Class of 2013, based upon exceptional performance metrics in growth, profitability, credit quality, and capital strength.

Completed the acquisition of Security California Bancorp, the holding company of Security Bank of California, a Riverside, California based state-chartered bank with approximately $734 million in assets.

Completed the acquisition of Plaza Bancorp, the holding company of Plaza Bank, an Irvine, California based bank with approximately $1.3 billion in assets.

In the fourth quarter of 2000, the Bank brought in the current management team to transform the bank.

Acquired First Associations Bank, including its national roster of HOA and Property Management banking clients and $356 million in assets.

Named a 2014 Super Premier Performing Bank in California by the Findley Reports, their highest classification, based upon growth, income, credit quality and return on equity.

Named a member of the Sandler O'Neill + Partners Sm-All Stars Class of 2014, based upon exceptional performance metrics in growth, profitability, credit quality, and capital strength.

Acquisition of Grandpoint Capital, Inc., the holding company for Grandpoint Bank, Bank of Tucson, Regents Bank, and The Biltmore Bank of Arizona with approximately $3.2 billion in total assets as of December 31, 2017.

Acquisition of Opus Bank with approximately $8 billion in total assets as of December 31, 2019, and its divisions PENSCO Trust Company (now Pacific Premier Trust) and Commerce Escrow.